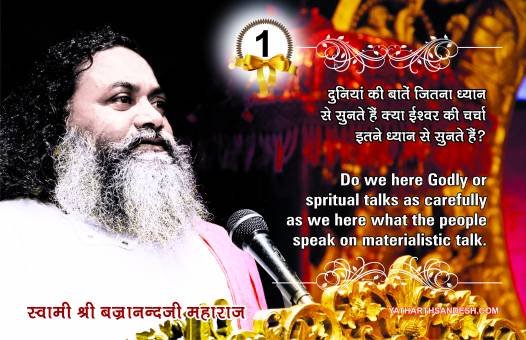 These eight are main solutions of all problems of humankind. The solution is given in 'Shrimadbhagwadgeeta'. All the holy scriptures of the world were emerged after Shrimadbhagwadgeeta. If we remove discussion of God from all the holy scripture of the world then nothing will be left to them to give to society except sorrow. Shrimad bhagwad geeta describes systematic way to attainment or realization of God.
Jain and Buddha Philosophy are 2500 years old, Bible 2000 years old, Kuran 1500 years old, Aadi Sankaracharya philosophy is 1300 years old, Sikh and Kabir philosophy is 500 years old and the message of Shrimad bhagwad geeta is 5000 years old. Basically it is without beginning.
"The Lord said, 'It was I who taught the eternal yog to the Sun-(Vivaswat), who then taught it to Manu(adam), who taught it to Ikshwaku. Derived from tradition, this yog was known to sages of the royal state (rajarshi), but at this point, O the destroyer of foes, it declined and was almost extinct. That is the timeless yog which I now impart to you, because you are my devotee and beloved friend." (Geeta, 4-1,2,3)
Geeta is first divine knowledge(wisdom) given to first man Adam(Manu). That's why Geeta is unarguable holy scripture for whole humankind. And whole humankind is a descendent of only Adam(Manu). Whole humankind is called 'Admi' as born from 'Adam' and also called 'Manuj' as born from 'Manu'.
While working hard a man does not get anything permanent, everything will be lost. It will give pain when lost. A government of any country awards school or college after viewing its result. It does not see the attendances of student and teacher. Likewise, whatever a man gets in his life through hard work, is lost and becomes the reason of sorrow. A man never thinks about the result of running of his life so he always tries to splitting each other. Can one be a well wisher of humankind who is taking the way whose result is sorrow? If man thinks carefully what is the result of splitting humankind? Can anybody be a well wisher of humankind who is compelling him into a small boundaries of his principles while the result of any thing or any post is sorrow?
One will be called the well wisher of humankind who opens the gate of self liberty by stopping ruin and conflict.